So, where have the last few months disappeared to?

The 8th & 10th April marked the 1 year anniversaries of my last day working in London and the day I relocated to beautiful Lincolnshire respectively. A move I wish I’d made years earlier. Nothing beats the quality of life leaving the Big Smoke has given me.

Our gorgeous cat, Sophie, has also been poorly with feline cystitis recently so there have been a fair few visits to the vet. Being vision impaired and quite a nervous little thing she gets stressed quite easily and ends up with cystitis. We need to be very mindful of her needs a

nd it’s distressing as her carers when her mood and general disposition are obviously low. She’s not the most interactive of cats, preferring food and sleep. Her vision problems mean she’s also prone to weight gain as there has been little or no exercise in her life. We do try but again, she’s quite lazy and bores after about 30 seconds of play! Despite all this though, she’s very much loved and we do whatever we can to provide her with a comfortable, safe environment.

In March, I joined up as an Ambassador for Tropic Skin Care. I decided it would be a fab way of meeting new people, gain some extra income and as the products are so amazing (cruelty free, naturally plant based and British made) I was hoping it would be something of a walk in the park. I have been proven very wrong on that count however. Trying to get people interested has been like trying to convince someone in need of a root canal to forgo the anaesthetic! I get a little bit of interest but it just fizzles out. Other than wrestling people to the ground, I am rapidly running out of ideas on how to get my little side business up and running. 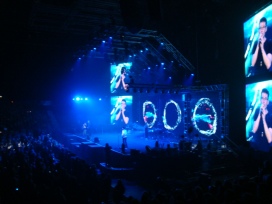 I took my boyfriend to see A-Ha perform at the Barclaycard Arena in Birmingham. I had been something of a fangirl back in the 80’s but hadn’t listened to A-Ha since Stay On These Roads. My boyfriend, however, is a loyal, lifelong fan so I bought the tickets as a birthday gift for him. It was such a fantastic gig, we had great seats and for me it was fab to see them 28 years after seeing them live as a 15 year old screaming teenager! Morten Harket looks pretty amazing for 56 and the band put on an excellent show. I’ve decided to update my back catalogue and rediscover my old favourite band.

I am super excited, however, for Monday 11th April. As I will be travelling down to the O2 in London to see my all time favourite band, Muse. It will be my 9th Muse gig and I’m as excited to see them now as I was the first time back at Wembley in 2007.

So, last week after a couple of months of neglect and trying to write the odd paragraph here and there I finally knuckled back down to the book. Chapter 18 is pretty much complete and chapter 19 is taking shape nicely. I have to remind myself that this is only the first draft and that there will be opportunities for tweaking, rewriting and editing later. I will also find some beta readers to provide critique at some point but as my story is now two thirds of the way through I want to get it finished.

One success I’ve had recently is the exposure and response to my short story “Grey Ice” on Scriggler. It’s had over 1,200 views, received some lovely comments from readers and was chosen as the Story of the Day on 29/02/16. I felt amazingly validated as a writer and hope that my next short story will be just as well received. This of course , depends on how it fares in the Mslexia Short Story Competition 2016. If it doesn’t succeed I will publish again via this blog and Scriggler. So, keep those fingers crossed for me!